Branded a Witch, She Left School

NO LONGER ABLE TO STAY IN HER HOME, AASMAYA FLED TO THE CITY SEEKING OPPORTUNITY.

With hopes of ending discrimination toward females, the government of Nepal has approved a UN treaty and proposed a reform bill to help enforce it. But there are still more challenges ahead. 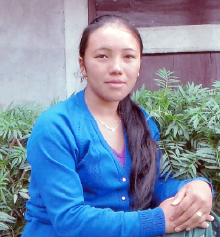 Even with approval of the treaty, women in Nepal are still fearful of defying social norms and traditional values, and are reluctant to show support for reforms. As a result, violence toward women in Nepal is often still tolerated.

In many villages, women are often victimized by their own husbands. They usually won’t receive justice from the local police and courts, and won’t report abuse for fear of being expelled from their household and maternal home as well. And fear of disapproval from family members further pressures victims to remain silent.

To Nepalese women, issues such as gender equality, women’s rights, and feminism are similar to fairy tales. It is nearly impossible for village girls to be equipped with education and training in order to blend into modern society since the attitude of their society remains entirely primitive.

In addition to facing deeply-rooted discrimination, Nepalese women are even prohibited from innocuous actions such as smiling or talking directly to a male, and have tight restrictions on their mobility and speech.

Traditional faith and superstition has compelled Aasmaya Gurung, from Laprak 8, Gorkha, to quit schooling. One day in the classroom she stumbled and fell on the floor. Thereafter she was called a witch not only in school but also in the village society too.

As everyone started treating her as a witch, she was ashamed and discouraged from going to school. Then her family started physically abusing her. She could no longer stay in her home and fled to the city seeking opportunity.  She was arrested by the police and sent back to her village.