Kabita Was Being Trafficked to India

JHF VOLUNTEERS HELP RESCUE YOUNG WOMEN WHO WERE BEING TRANSPORTED TO FALSE JOBS.

A critical effort that JHF coordinates is the engagement with local law enforcement and non-profit organizations to rescue girls who have been pulled into trafficking situations. During the summer of 2012, JHF volunteers helped rescue a number of young women being transported to fictitious employment arrangements. One of these young women was Kabita Gurung. 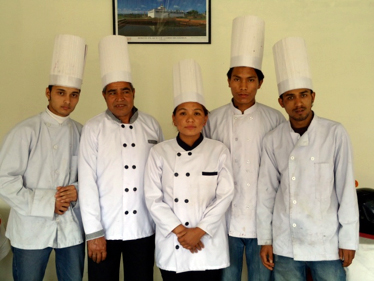 Kabita Gurung celebrates her graduation from the Journey Home Foundation with her instructors. Kabita has already secured a position as one of the chefs at the Hotel Crystal in Pokhara, a tourist destination in the Himalayas.

Kabita was one of four girls rescued by volunteers before they were transferred across the border to India for trafficking. The volunteers, who form cells through JHF and cooperate with the local police, had received anonymous information on the transport, notified the police, and assisted on the intervention.

The girls were discovered in the company of a man who claimed that he represented an orchestra in India, and that the girls were “musicians” he had recruited. None of the girls had documents with them.

Upon interviewing the girls, it was discovered that they had been lured from their villages under false representation from the escort. They had been told that they would be taken to India to work as nurses in a hospital. Desperate for work and income, the girls had been eager to take advantage of this opportunity.

But after the voyage had begun, they became skeptical of the arrangement. Without documentation or any way to return home, the girls could only continue onward with their escort in hopes that their suspicions were unfounded. Fortunately, the JHF network was able to track down the kidnapper before the girls could come to harm.

Even though the girls were returned home, they still faced bleak futures, with little hope of developing a way to support themselves or their families. Frequently, kidnappings bring shame to a girl’s family, who were expecting honor and prestige from having a daughter achieve success beyond the village. For this ‘crime,’ the girls are often ostracized when they return.

Journey Home Foundation (JHF) provides alternatives for these young women through its job training programs in culinary arts, textiles, and handicrafts. These programs also offer room and board if the young women come from distant areas. With help from donors, certified teachers instruct and mentor the women until they earn their diplomas and certifications and are qualified to work in legitimate businesses in Nepal. 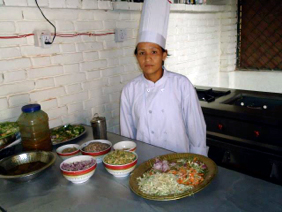 The four young women, including Kabita, began their culinary arts training in the spring of 2012.  Kabita was the first to graduate, and the other three are on track to graduate as well. Furthermore, JHF also helps the women find job positions once they complete their training. Recently, Kabita accepted a position as one of the chefs at the Hotel Crystal in Pokhara, a resort hotel in the Himalayas.